On Friday the 28th of November, 2014 I and two of my mates were lucky enough (thanks to That’s My Ball SEN golf competition) to play a round with David Schwarz at 13th Beach. It’s fair to say that we were all nervous before the big day, it’s not every day that you get to play a round of golf with an ex AFL champ who is now well known as a radio program host on the Run Home on SEN each weeknight. However, it was like playing golf with someone we had known all our life. Ox has the unique personality mixture of a bit of Rodney Rude and Rodney Dangerfield and the sporting competitiveness of an Ayrton Senna. The first 5 holes were spent discussing the recent passing of Phillip Hughes. As myself , Rob and Peter played cricket together it was a topic that touched a bit of a raw nerve with us and it was great to discuss that with David who shared stories of his experience being on air when the news broke that Peter Brock was tragically killed and then when his great friend and teammate Jim Stynes passed away and how good it is that as a society we can sit back and remember and pay tribute to our heroes. The 18 holes seemed to be played in about 2 hours the time went very quickly as the old saying goes time flies when you are having fun it actually felt like an end of season cricket trip than a round of golf. David kept us entertained on each hole with stories about his golf, football, radio broadcasting, life in general and was quick to offer all of us advice on where we should be aiming our next shot to or helping correct swing speeds and David’s enthusiasm to look for strayed T shots was amazing. From a golf point some very good match play golf was played with the end result being all square after the final hole. As my mate Rob said to David on the 18th that is the most enjoyable golf game he has played in over 5 years a statement that I would have to also concur with. Thank you Caroline and thank you David Schwarz for being such a fantastic host. It is a day that I will always remember and will always bring a smile to my face when I think about the day.  – Michael Calnan

We’re so glad you and your mates had a fantastic day Michael.

Signup for our newsletter 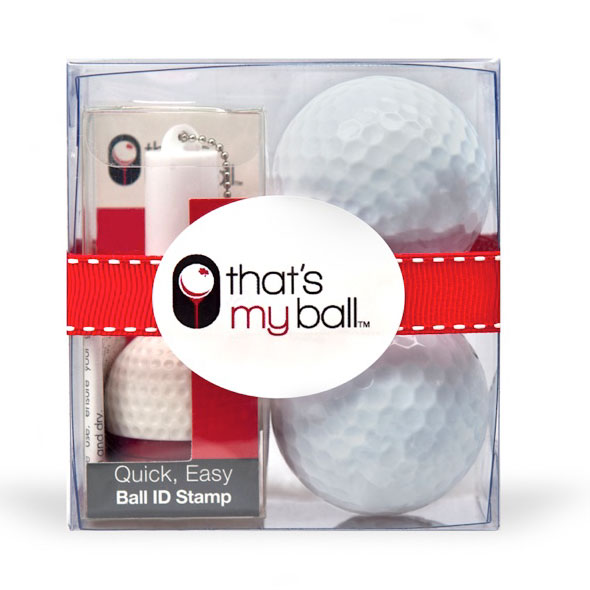 $26.95
A fantastic gift or tournament prize idea for $26.95 with any That’s My Ball ID Stamp selection (designs, letters and zodiacs). Includes 2 good quality golf balls presented in a clear gift box with ribbon.

To purchase, select Gift Pack Upgrade when adding the selected stamp to your shopping cart.